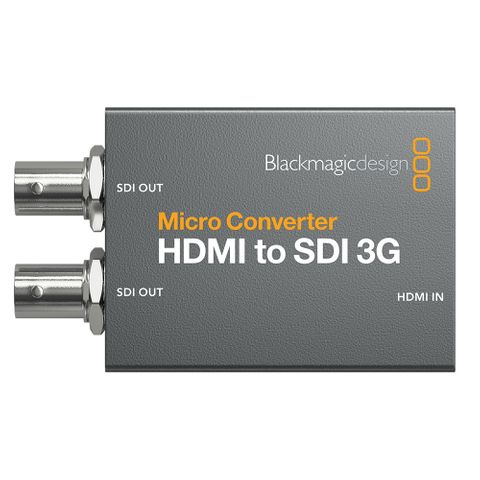 Super compact and rugged, the Micro Converter HDMI to SDI 3G enables you to link HDMI cameras or computers to pro-style SDI (BNC) monitors or components. You can also use several units to extend HDMI over long distances using SDI cable. This compact converter has one HDMI input and two 3G-SD/HD/SDI outputs that can be set to Level A or B. It auto-detects and matches your HDMI input to the SDI output and is compatible with input/output resolutions up to 1080p60. The Micro Converter HDMI to SDI 3G features HDMI timecode support, SDI re-clocking for stability over long cable runs, and support for a wide range of pro broadcast resolutions including cine-style 48 fps.

This pocket-sized converter features a sturdy metal housing with power and signal LED status indicators and rugged connector interfaces. A USB Type-C port enables the HDMI to SDI 3G converter to easily connect to and be powered by large-screen monitors, laptops, desktop computers, or projectors. You can also power this converter using the included 100-240 VAC power supply, complete with four international socket adapters.