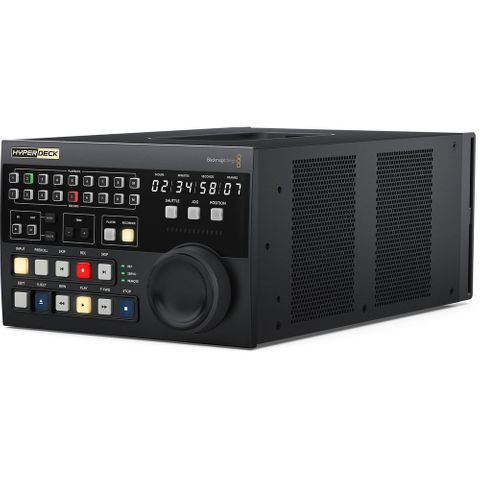 The HyperDeck Extreme Control is a 3 RU, half-rack width installation offering traditional deck controls for virtually any type of deck thanks to RS-422 connectivity. Eight RS-422 ports allow you to control up to eight decks, including legacy decks and the HyperDeck Extreme 8K HDR.

Controls include transport, timecode, and deck status buttons plus a large search dial for jog, shuttle, and positioning control. There is a row of eight recorder selection buttons and another row of eight player selection buttons. To protect videotape masters, recording requires pressing both the "REC" and "PLAY" buttons simultaneously. The HyperDeck Extreme Control also features a built-in editor for automating the ingest of legacy videotape-based programming.

Automate Editing between Tape and HyperDeck

You get familiar transport controls such as "PLAY" which, when pressed during a recording, will cause the recording to stop and the deck to continue to play from the same point. To start a recording, press both the "REC" and "PLAY" buttons simultaneously.

The high-quality search dial features both jog and shuttle control and has an electronic clutch that stops the knob at the end of the shuttle travel or allows for free spinning when in jog. HyperDeck Extreme Control replaces varispeed with a position function that allows rapid movement up and down the recording. The search dial uses twin bearings so you can free spin it for fast jog.

Full deck status is provided on a large timecode display. This display indicates the timecode of the current selected deck, and the timecode source switch will control what's displayed on the time counter. The horizontal light bar indicator allows the user to see the position of the search dial and provide a visual feedback, which is important when working with remote decks. The servo indicator light will show when the deck is in play or record mode and the servo system is correctly locked. Because remote decks will still display the time counter and transport state, the remote indicator will let you know if the deck is in remote. There's even external video reference status.

Flexible In and Out Point Entry for Editing

A pre-roll button is provided for cueing decks. When this button is pressed, the tape machine will run to the pre-roll point, which is generally five seconds before the in point. If you are using an older broadcast deck, it could take a few minutes for the deck to get to the cue point as the machine has to spool the tape. If the "PREROLL" button is pressed simultaneously with the "IN" or "OUT" button, then the deck will cue to the specific in or out point.