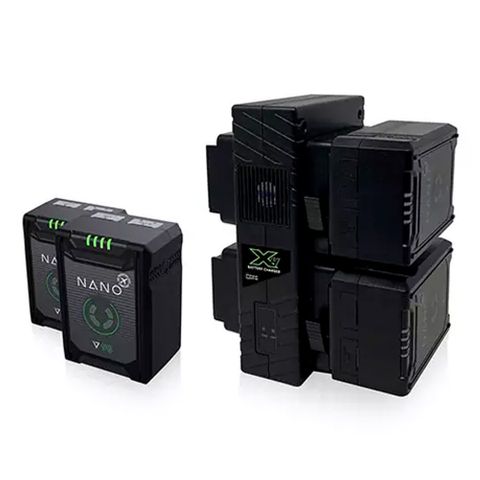 The X4 charger and Nano Micro kit is all-in-one compact power kit if you’re looking for a micro style option.

The X4 charger is a compact charger with an upright design and a lightweight, plastic housing. It offers a simultaneous 2.6A charging as well a single bay per side fast charge. When only needing to charge one battery pack on each side, the rapid charge will charge the pack at 3A (one 98wh pack in under 2.5hrs). When two packs are placed on either side, the charge will charge the lesser charged pack up to the same level as the other, then charge both at 2.6A current combined.

To accompany the X4 charger are the Nano Micro packs which are quite possibly the smallest style pack on the market today. Measuring in at less than 4″ in height and 2″ in depth, while weighing a feathery 1.2 lbs., the NANO-V98 is the perfect “grab and go” pack for the majority of powering applications. Capable of handling up to a 10A load, consider these packs for lighter camera powering applications, on-board monitors, recorders, wirless tx/rx, etc.

The packs feature an on-board unregulated p-tap which can be used to power most 12vdc devices and a 5V, 3A USB, and a 4-stage LED gauge. The packs also include a 5V, 3A USB for powering/charging mobile devices, and a 4-stage LED gauge to view remaining power. Lastly, the 14.8v, 98wh capacity allows for the packs to be transported carry-on without restrictions under IATA, ICAO, and UN regulations. The packs have been UN tested and certified, passing UN38.3 certification.